I’m fond of pointing out that language is the currency of a culture. Charlemagne figured out that if you can control the currency, you can turn your economy into a weapon against rivals. Seigniorage had the benefit of making the crown wealthy, but control of the mint allowed the King to stabilize the economic life of his kingdom, thus attracting foreign investment. King Offa of Mercia figured this out around the same time.

Similarly, radicals figured out that if you control the language, you can control the politics of a society. This can be as simple as picking an appealing name for a cause or as complicated as reframing an issue so that their preferred option appears to be the default, thus putting traditionalists on their heels. The use of rhetorical sleight of hand allows the radicals to set the terms of public debate, thus giving themselves an enormous edge.

The Vox story from the other day I used as a jumping off point for some good old fashioned Merkel bashing is a good example. By focusing on the fact that the exploding jihadist are technically citizens of their host countries, the radical can both muddy the waters and shift the focus. Instead of talking about the guys named Mohamed suddenly exploding in public places, the debate can be shifted to other topics like racism and xenophobia.

Open borders, which is a central part of the new radical ideology that is replacing old fashioned Progressive ideology, is relying on the same old tricks to warp the language. Illegal invaders are called “refugees” and helot labor is re-branded as “guest workers” to make it sound better. The point is to give them a pleasing name. After all, only Hitler would be hostile to refugees and guests.

Of course, there are two big problems with selling the New Religion of a borderless world to the citizens of the western countries. One is that many of the people on the other side of the border are savages. There’s no hiding the daily atrocities that are just a normal part of Muslim life.The other problem is that Muslims have a habit of exploding in public places, like airports and train stations.

People tend to notice these things. When you are walking to the train station, you may not notice the Hungarians or Ukrainians. The Greek or Italian will stand out in Sweden, but are otherwise of no interest. The guy screaming “Allahu Akbar!” before he explodes is going to leave impression, assuming you live through it. People have figured out the the Mohamed-to-Suicide Bomber Index.

The solution is to re-brand the exploding Mohamed as a citizen. This NY Magazine article is a pretty good example of how the radical utopians are trying the muddy the waters to obscure reality. Instead of asking why Mohamed keeps exploding, the story  is “why are so many citizens of Western countries going on jihad?” We’re supposed to believe that ISIS is now loaded with gingers from Ireland, I guess.

The associated chart is here: 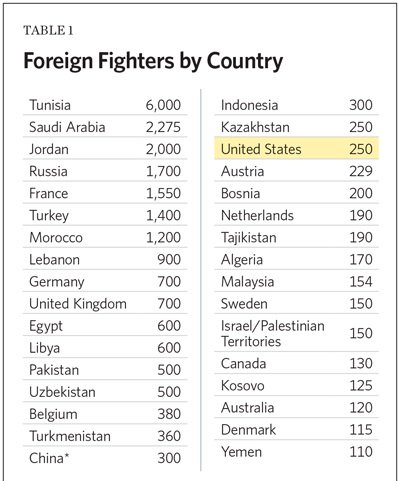 The article does not bother to look into these numbers. The Russians on the list, for example, are Chechen warriors, who have a long history of being a sort of Varangian Guard for Arab potentates. The French are almost certainly Algerians. The Germans are Turks and Moroccans. The Canadians are the little mushroom people of Nova Scotia, known for their tunneling skills.

The point here is that instead of looking at the data with clarity, the effort is to obscure. Let’s not notice that second and third generations Muslims are prone to Sudden Jihad Syndrome. That’s an argument against the importation of Muslims. Instead, the effort is to pretend that these are nice boys who become disaffected and go off in search of belonging and purpose.

This is why guys like Trump and Geert Wilders are so horrifying to the globalist fanatics. They make observations and statements that are clarifying. When they point out that Muslims do poorly in the West and are a massive burden on their host countries, it makes the arguments for open borders sound ridiculous. How can anyone justify importing people who peak at being welfare spongers? Why risk the two or three percent that suddenly explode?

The flip side of this is that it is crucial to never surrender the language to the radicals. They are extremely good at this game so it is hard to win these battles, but they must be won. As soon as we stop talking about the ethnic and religious aspects to terrorism, we have accepted it as a part of our daily life. This is an unnecessary elective cost no society should incur just so managerial elites can get some grace.