A year ago, the life force of 49 carbon based life forms ceased somewhere on planet earth. Memorial services were planned comewhere to let Hate know that he or she, the sex and gender preference of Hate is unknown, that it was not going to win, whatever winning means, in the context of a war against an abstract concept. Media operations have posted stories about the triggering incident along with images of the faithful shaking their fist at Hate, which they appear to hate a lot, but in the good way, not the hateful way.

The “incident” is the mass shooting by a Muslim fanatic at an Orlando homosexual club that resulted in hundreds wounded and 49 dead. Reading the Progressive media, you would not know that. The Washington Post wrote that “49 people died” as if they just fell over from some strange illness. The Orlando Sentinel has the decency to tell us how they died, but then insults everyone’s intelligence by claiming the motive is a mystery. The motive is clear to everyone, including the lunatics working at the Sentinel.

It’s a good reminder that the Progs relentlessly rewrite the past, even the very recent past, in order to fit the current narrative. Right now, they hilariously hold onto the idea of building an anti-white coalition that somehow includes homicidal Muslims and homosexuals, who Muslims hate almost as much as they hate Jews. To that end, they have set about writing out the Muslim antagonists from the stories about Muslim terrorism. Here we are a year after the event and they are blaming guns. In another year, the killer will be a white guy. This is why it is a fool’s errand to assign logical motives to Progressives. The goofy white woman holding the sign that reads “We Will Not Let Hate Win” in the Post story has no idea why she is there or even what she is saying with that sign. It is not even about a normal emotion like anger or sadness. People attending public memorial services for strangers can at least claim to feel bad for their community or humanity. That woman is there hoping to gain attention from the media so she can gain status among her coreligionists.

That’s the thing about this new religion. It is feminine. Their “war on hate” is more like a popular new diet craze or a fashion trend. The gals get into it because the popular gals are into it. Everyone gets into it more and more, until everyone is doing it to the fullest and it suddenly stops being popular. Some new thing is the new thing and the cool girls are into that and not the old thing. Today’s war on extremism is just the yoga pants craze, but for emotionally unstable single women. It gives them a way to gain attention.

It’s natural for people outside the Cult of Modern Liberalism to think that this weird religion has no future. No one wants to believe that something so insanely irrational could be the winning formula that organizes future societies. Everyone’s beliefs seem weird and delusional until you start to believe them too. The pagans of Europe thought early Christians were a bit nuts and then they converted, as that made more sense than worshiping the old gods. Christianity suddenly was not so crazy after all.

Given that this weird new religion defines the emerging global ruling class, the safe bet is they have staying power beyond what logic would dictate. It’s natural for people to look to their betters for status signals. The entire self-help industry relies on this truth. Tony Robbins presents himself as a wildly successful winner. He will help you emulate him, so you can be a winner too. Mike Cernovich is following this model and has gone far, despite never having actually done much of anything, other than self-promotion.

The passionate embrace of egalitarianism and multiculturalism by our betters is a powerful intoxicant. While it may be insane to think a coalition that includes Jews, Muslims fanatics and homosexuals can last very long, it may not really matter. It is the idea of it that matters and that’s what the new religion is selling. For our betters, they imagine a world that looks a lot like Chevy Chase Village in Maryland, where everyone is from all over, everyone is nice and the dining options are the best. Who could be against that?

On the other hand, there was a time when communism seemed like an inevitability. When I was a boy, most people assumed that in the fullness of time, humanity would sink into the darkness of international socialism. Instead, the cost of making it work exceeded the benefit and eventually, the whole thing collapsed. Today you are more likely to run into a lesbian druid than a communist. Maybe that’s where multiculturalism is headed, like a wave, it will eventually crest and then recede, leaving behind a lot of dead fish.

Still, it is hard to accept. How can people with the ability to manage their own affairs convince themselves that the cause of the Orlando gay club slaughter was evil spirits, rather than the Muslim, who actually did it? How can sane people protest the march against sharia and march in favor of the gay rights at the same event? It defies explanation, other than it is some new form of mental illness that spreads like the flu, causing people to lose their marbles. It really does seem like collective madness.

When I was a boy, I would listen to my grandfather and his brothers tell war stories. Most served in the Pacific theater, against the Japs. They never got over the fanaticism they faced by the Japanese soldiers. They laughed about it, as men of that age would, but looking back I suspect they never could square what they saw with what they thought they knew about the world. Some things just defy all rationality and our current age may be one of those examples. 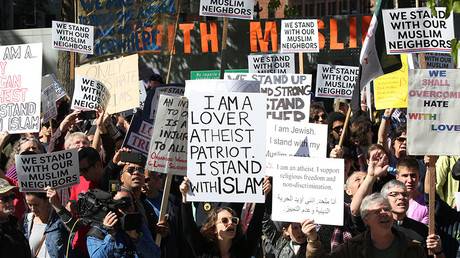 67 thoughts on “The Irrationality Of It All”