The new brings news that French voters have gone big for the fascists in their recent elections. They don’t call them fascists these days, but we know what they mean by “far right.” After all, anyone who is not 100% committed to post-national globalism must be Hitler or at least Mussolini. Of course, as soon as they get control of the state, they will suspend democracy and impose a dictatorship, so it is critical that the fascists never win an elections. This news sounds ominous.

France’s far-right National Front party dealt a major blow to the ruling Socialists Sunday after several of its candidates took prime position in the first round of local elections.

The main centre-right opposition UMP party also hailed a “big victory” as initial estimates showed it came out trumps in the elections, as President Francois Hollande suffers record unpopularity against a backdrop of near-zero growth and high unemployment.

According to preliminary results from the interior ministry, the UMP and allies took 47 percent of the vote nationwide while the Socialist party and allies took 38 percent, and the FN five percent — far higher than its 0.9 percent result in the first round of 2008 municipal polls.

That’s strange. That headline was a bit misleading. Both 47% and 38% are larger than 5%, at least for all known values of five. Maybe democracy works differently in France but here in America, you don’t win much of anything with five percent of the vote. The panic seems a bit out of line, given that fringe parties are always a part of European politics, most polling in the single digits.

Applauding what she said was “an exceptional vintage for the FN”, Marine Le Pen — head of the anti-immigration, anti-EU party — said the polls marked the “end of the bipolarisation of the political scene”.

Although the FN had been expected to do well, the first round results were far better than expected.

Far-right candidates came ahead in several key towns and cities that will put them in pole position in the second round on March 30. 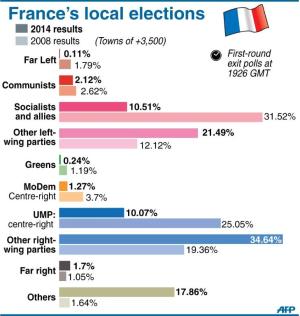 In the former coal-mining town of Henin-Beaumont in northern France, Steeve Briois went a step further and achieved 50.3 percent, an absolute majority which made him the outright winner and mayor.

Under municipal election rules in France, any candidate who gets more than 50 percent is declared the winner and there is no need for a second round.

The FN hopes to claim the mayorship of 10 to 15 mid-sized town after the second round, and if it achieves that, it will have beaten its previous record in 1997 when it had four mayors.

OK, it looks like the FN did well in rural areas while the Slightly Less Socialist Than The Socialists (UMP) did well in the major urban areas. Still, five percent is five percent, so the hyperventilating is a bit ridiculous. It reveals the paranoia and insecurity of the globalists despite their total control of the world. Maybe they know something that is not obvious to the rest of us. Alternatively, maybe they just need a bogeyman to keep everyone from noticing what’s happening in the West.

For Americans, this is a glimpse of what’s on the way. The FN is mostly what the Democratic Party looked like in the 1950’s. That’s populist, patriotic and protectionist. In France today, being patriotic is like being a Klansman in New York City. Populism is about as tasteful as a septic tank. Of course, protectionism is considered on par with witchcraft. The idea that the government should put the interest of citizens ahead of foreigners is a banned concept in France. In a generation, that will be true of America.

Actually, 5% can put a small party in the position of kingmaker. That can be pretty consequential.