The big hobbyhorse issue for libertarians is America’s incarceration rate. They love the issue because they get to prattle on about weed, while sucking up to the Left, who are always looking for an excuse to release felons into your neighborhood. In other words, they get to sound tough about small government in a way that is entirely safe from the wrath of their Progressive masters.

While I think our prison system is a mess, my response to libertarians over the issue is always the same. “How many current inmates would you like released into your neighborhood? On which corner of your block should we put the halfway house?” It’s a fun bit because no has yet provide an answer. Just as it is easy to be generous with other people’s money, it’s easy to be kind to convicts from a great distance.

It’s even easier if you are insane. This story I saw posted on twitter was getting passed around by the usual suspects, suggesting that maybe I’m too soft on libertarians.

What Lind doesn’t talk about is the way that the vast, vastly profitable private prison industry created and lobbied for legislation that criminalized more conduct and set out longer sentences for violations, operating in opaque secrecy, running forced-labor camps, profiteering from prisoners and their families, bribing judges to send black kids to jail, and producing a system where the rich can launder billions for drug cartels without a single criminal prosecution, but poor people caught with minute amounts of weed go to jail for long stretches.

In other words: that hockey-stick growth isn’t an accident.

If you follow the links, you find the Alex Jones type paranoia that has always been a part of the modern Left. Instead of secret government agencies in league with space aliens, you have secret corporate agents in league with aliens. It’s The Deep State™ run out of a corporate boardroom instead of Langley.

Putting all of that aside, it does raise an important question and that is how were we able to have relatively low crime rates, adjusting for race, age and sex, while having a stable prison population. Something changed in the 50’s and 60’s that led to the sudden upward turn in crime. 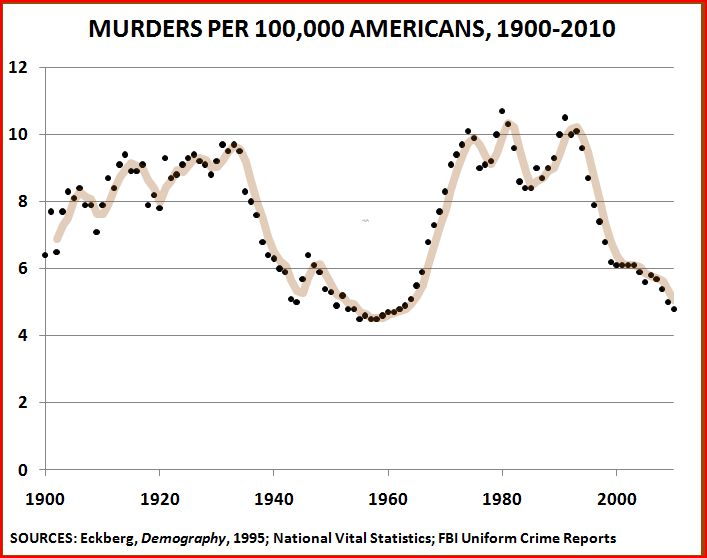 The obvious candidate for what changed preceding the spike in murder rates is the Civil Rights Movement. The greatly diminished status of blacks would have suppressed crime rates in two ways. First, the fear of white retaliation would have resulted in high levels of self-policing among blacks. Second, white indifference to black life would have artificially reduced the crime stats.

The trouble with this explanation is that white murder rates did tick up in the 60’s, just off a much smaller base so it was less obvious. 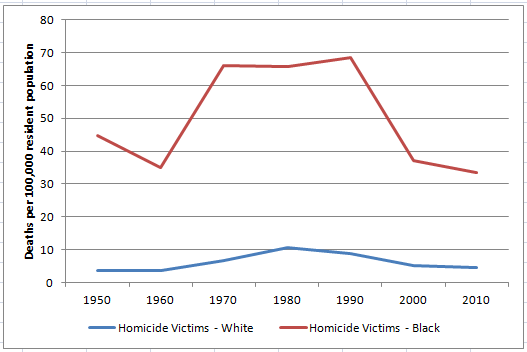 The trouble here is getting good data of crime rates by race from before 1980 is surprisingly difficult. I’ve been searching and this is the best I was able to find. Crime rates by race are slowly becoming forbidden knowledge. Even so, it’s hard to honestly tie the spike in black crime to the Civil Rights Movement without better data showing a bigger spike than we saw in white crime rates.

The more politically correct answer is the proliferation of street drugs and the drug trade. Libertarians love this one, but so does the Left because it conveniently avoids talking about race. The trouble with this explanation is that it assumes people suddenly went insane and started taking massive amounts of street drugs. This is one step away from blaming evil spirits.

The Old Right answer is that general assault on traditional culture that started in the late 50’s and accelerated into the 70’s eventually broke down the traditional ways of controlling crime and other social pathologies like drug taking. The result was a rise in social anarchy. Eventually, we evolved a new way to deal with the problem, which was mass incarceration.

The crime issue is a good example of how public policy is always about trade-offs, Swing the wrecking ball through a social institution and something replaces it. It’s also an example showing how American Liberalism will inevitably end in authoritarianism. As traditional institutions are destroyed, the state flows into the void. The existing organic institutions grow weaker relative to the state, making them easier to knock over.