Franz Boas is credited with originating the idea that the Eskimos have an unusually large number of words for snow. The implication is that they have an usually keen understanding of snow, due to being surrounded by it most of the year. The accuracy of the claim is tangled up in a much larger debate about language, culture and now, genetics and race. In dissident circles, the Sapir-Whorf Hypothesis is enjoying a bit of a renaissance for the same reason

An example is in this post on National Review.

Apparently only conservatives and others on the right can be obstructionists, according to Roget’s Thesaurus.

A search for synonyms of “obstructionist” on Thesaurus.com, which cites Roget’s, reveals that the source considers several words related to conservative and right-leaning political stances to fit the definition of a “person who is cautious, moderate; an opponent of change.” Under antonyms, it lists left-leaning words.

Included in the list of obstructionist synonyms are “right-winger,” “right,” and “rightist” and ”Tory,” the British conservative party.

Other synonyms listed for obscrutionst are “traditionalist,” “conserver,” “conventionalist,” “unprogressive,” and “redneck.”

Here’s a screenshot of it. 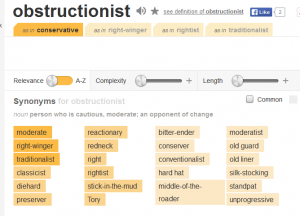 Progressives have a long list of words for “bad.” Terms like “extreme” and “right-wing” are lefty epithets clearly intended to mean “bad.” This is whi it has become a gag on the right to call yourself an “extreme right-wing extremist right-winger.” Another way to look at it is these are all words that mean “outsider” to the hive-minded members of the progressive cult.

The Daily Howler has another example, this one from the Merriam-Webster Dictionary.

In July, we learned that a Google search of the word “bigotry” turned up a definition that equated the word to “right-wing.” The sample sentence from the Oxford Dictionary set off a small firestorm of anger by conservatives, who don’t consider themselves bigoted and don’t think it should be part of any dictionary definition of the word.

A review of Webster’s synonyms and antonyms section of the word reveals the following:

In other words, liberals and progressives are the opposite of bigoted, but anyone related to “conservatism” is.

If you are a member of a cult, a hive or a tribe, knowing the boundaries is all consuming. It is, after all, the boundaries that define you. It’s why Jews, for example, look at Christians as a monolithic block. From their perspective, they are just the the rival team. The atheists and non-believers are mixed up in the undifferentiated other in way that seem strange to Christians, who draw different boundaries.

For Progressives, we see the same siege mentality we see with Jews, the former being irrational while the latter is rational. That’s an important distinction. For the Left, all that matters is whether you are inside the walls of the cult or outside the walls. The former is “one of us” while the latter is the hostile undifferentiated other, for which they have an endless supply of labels.

Note too that Progressive theology is greatly shaped by Judaism. It has long been noted that Jews are wildly over represented on the Left. It is reasonable to assume that a lot Jews getting together to create a political movement will end up leaving a lasting impression on the resulting product. It’s why neo-conservatism sounds like a weird combination of tzedakah and libertarianism.

3 thoughts on “The Eskimos on the Left”