No, this is not a post about lesbians. I’m talking about Liberals. Well, that’s the term the Wall Street Journal still uses for the people of the New Religion. According to this post on their site, Liberals are enjoying a renaissance of late.

There are signs that liberals are making a comeback — and not just because a socialist is running for president, gay marriage is spreading like wildfire and pot legalization is gaining acceptance.

A new analysis of Wall Street Journal/NBC News poll data finds a marked  increase in the share of registered voters identifying themselves as liberals, and an even bigger drop in the share saying they are conservatives.

In three national polls conducted so far in 2015, the analysis found that 26% of registered voters identified themselves as liberals — up from 23% in 2014. At the same time, the share of voters identifying as conservatives dropped to 33% from 37% in 2014. 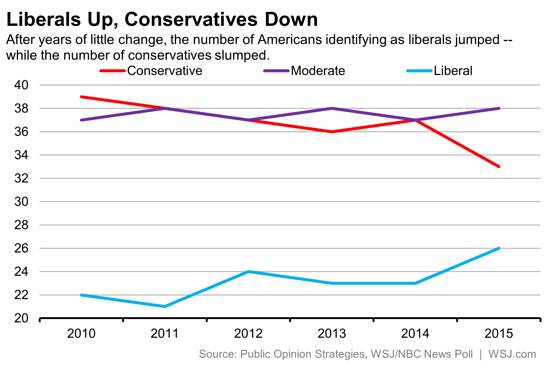 The defect in this sort of thing is that no one bothers to define the terms. To the people of the WSJ editorial board, conservative means global capitalism, open borders and permanent war on the periphery of the empire. To old guys who were once regarded as typical conservatives in America, none of this makes the least bit of sense. Today’s conservatism looks a lot like what was called liberalism 35 years ago when Reagan ran for president.

That would, in part, explain why more people are inclined to say they are liberal. If the people calling themselves conservative are embracing most of the liberal causes, the only way to remain on the trendy left is to race further into the extremes. On the other hand, people like me no longer describe ourselves as conservative because we are at odds with everything the modern conservative supports.

That’s what never gets picked up on these sorts of surveys. Using a two-dimensional scale for describing ideological inclination is fine, but ours was defined for the purpose of reinforcing Progressive identity. At one of their spectrum is Hitler and at the other is Stalin. The former is a typical person outside the hive, while the latter is a well intentioned, but horribly maligned member of the one true faith.

The result of this bizarre left-right axis is that the folks at Reason Magazine are on the same side as Hitler, a socialist and nationalist. It places Mussolini and FDR at extreme opposites ends, when both men greatly admired one another until you know who came along. The fact that modern Progressives fully embrace the corporatism of European fascists is another paradox of this way of thinking.

I suspect there’s something else going on now. This Great Progressive Awakening has not followed others. There’s no sense that we are about to see a return to normalcy and a snap back toward traditional American patterns. Christianity has collapsed in America and is no longer an anchor of the culture. In 1968 Nixon could count on the silent majority. In the 70’s the Evangelical movement joined politics, leading to the Moral Majority that helped elect Reagan.

Today, nothing like that exists. Evangelicals are spent as a political force. The Catholic Church is in tatters with most of its members either worshiping the NFL on Sunday or ready for the grave. The mainline Protestant faiths are dead, for all practical purposes. The culture has been turned over to homosexuals and blacks, whose extreme intolerance of normalcy makes even the cartoon villains of the Civil Rights Movement look tame.

If you pay any attention, no one could blame you for thinking that it is all over. The lunatics have won and it is now an uninterrupted slide into the abyss. Young people could not be blamed for joining the winning team and making the best of it. They have lives to live. This is, after all, how Christianity spread in Europe.