When I was just starting out in the world, I worked for a company that had an active human resources department. This was when HR was being overhauled to accommodate middle-aged women without useful skills. Companies were trying to “diversify” their management so they hired a bunch of women for their personnel departments, re-branded them as “human resources” and set them loose to get involved in things well outside the normal scope of corporate personnel departments.

I was new in the world so I had no way to see what was happening. I just assumed it was the way things worked, even if it was obviously insane. There was one woman, who was always gossiping with the female staff, trying to find out who was dating whom, who was socializing with whom and generally playing the role of busybody. In a better age, she was the sort of woman who would end up fitted with a bridle. As far as I could tell, her only job was to gossip, as I never saw her doing anything else.

Inevitably, people would be called into HR for some crime. Once in a while, someone would disappear. It was always males getting the call and it was almost always over having said or done something that offended a female employee. The thing that puzzled me at first was that the males who survived the interrogation never spoke of it. Maybe it was shame or fear, maybe something else that was not obvious. They got called in, something happened and they came back chastened from the experience.

The way it worked is familiar to anyone who has read about Stalin’s show trials. The prosecutor, in this example it was the gossip, functioned as a spokesman for the accusers, as well as the witnesses, in addition to laying out the case against the accused. She would say something like, “Some people have said you said X and you know that you have a reputation for saying X so you can see how we would be concerned. In order to get to the bottom of this, we thought it was a good idea to call you in so we could talk about it and hear what you have to say.”

The accused was presented with an invisible accuser who could never be confronted so their testimony went unchallenged. Slipped into it was the assertion that the accused had a reputation for whatever it was he was accused of doing. Again, there’s no way to confront this as there is no accuser, just a whisper in the wind. The poor bastard in the hot seat was faced with the impossible task of not only defending himself, but doing so as a person assumed to be a habitual offender or at least known as one.

The use of invisible victims and imaginary crimes is the core tactic of the social justice warriors. You see that in this response from Apple to Gab about their application to the Apple app store. 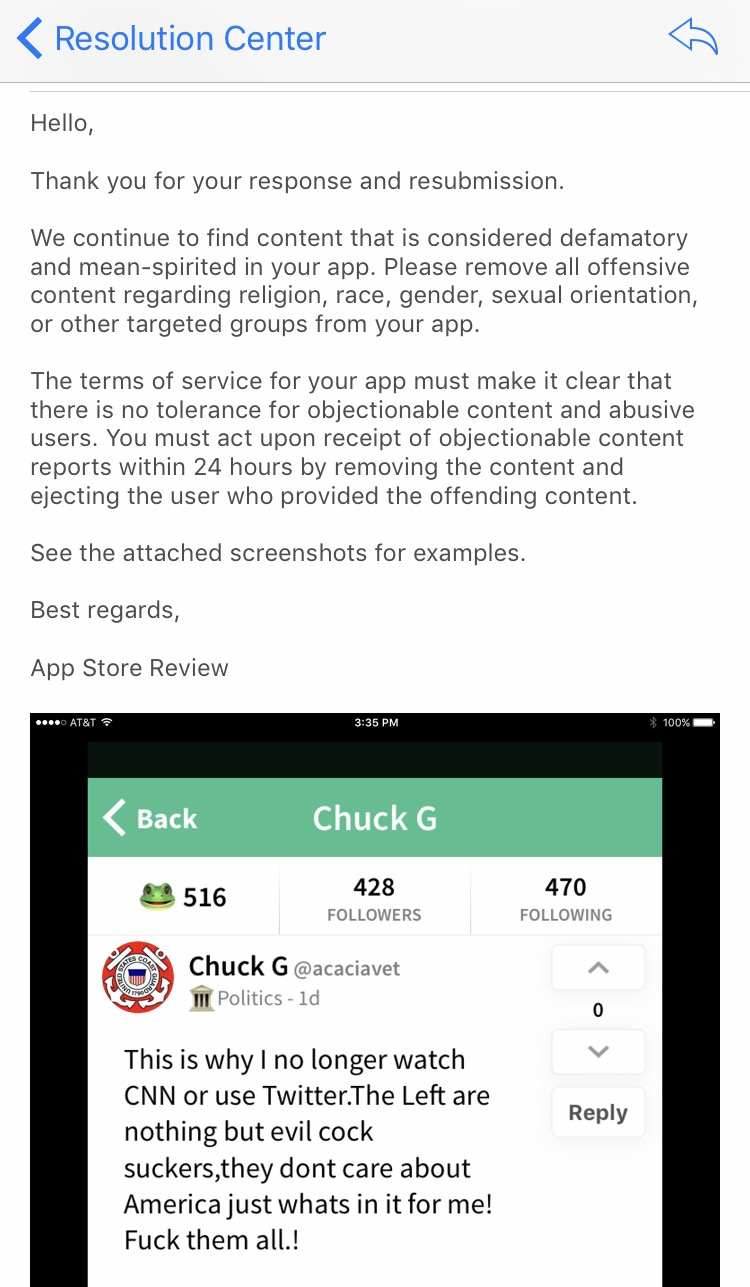 Notice the language. They “find content that is defamatory and mean spirited” but they never mention who is being defamed. The only way words can be defamatory is if someone, a real living human, is being defamed. You see the same thing when they write “there is no tolerance for objectionable material.” Objectionable to whom? The only way something can be objectionable is if someone objects. The person defamed and objecting is an undefined entity that is just assumed to exist.

In Stalin’s show trials, the victims were accused of mysterious crimes like conspiracy and sabotage, even though it was never clear with whom the accused were conspiring or what it was they were sabotaging. Stalin’s henchmen would use pressure to get some of the victims to confess, which was then used as “proof” that the rest of the accused were not just guilty, but guilty of obstructing the revolution’s search for truth. An innocent man trying to defend himself was left to swing at ghosts and shadows.

The modern day Stalinists use the same tactic, in which they accuse enemies of fostering a hostile environment or promoting objectionable material. Apple is not saying they object to the material. They are claiming to speak for those unnamed people who do object, because Apple is just looking out for them, whoever they may be. Since these alleged victims are a mystery, there’s no way for Gab to confront them or argue that they are complying with Apple’s terms of service. It’s just modern show trial in which the verdict is known in advance. The only question is how long before the accused breaks.

Those who confessed quickly in Stalin’s trials did so hoping for leniency, but that never came. Just as the verdict was known in advance, so was the punishment. The same system applies today. Gab could ban all of its users and just have pics of Hillary and Obama and they would still not get on the Apple store. They have been found guilty of blasphemy and heresy. That will be the verdict of the trial and the punishment will be banishment. The only mystery is whether Apple can make them grovel.

The guy running Gab is not going to grovel. He knows the deal. In fact, more and more people are figuring out that there is no dealing with the Left. There’s no accommodation to be made, no compromise to be found. In fact, that was true thirty years ago when I was just getting started. The company gossip was not a person with whom you could strike a bargain. She was a Torquemada, who existed to find the guilty. The answer then as now was what Andrew Breitbart said years ago. The answer is “Fuck you! War!”