A society at war is the most obvious example. For example, the Russians were locked in a stalemate with the Germans in World War I and the accumulated costs of war began to reveal the faults within Russian society. Czarist Russia, in times of peace, could provide enough food and enough authority to maintain order. The war sapped the strength of the state such that it could no longer provide enough food and enough authority. In the ensuing crisis, the state broke and eventually collapsed.

The Bolshevik Revolution is a great example of how leadership failed to respond to the crisis because their range of options was limited by forces outside of their control. Liberalism, in the European Enlightenment sense, had not taken root in Russia, because it was a land of peasants and aristocrats. There was no middle class, at least not one with power, with which the aristocrats could bargain. The Czar should have struck a deal with the Kaiser early on, but he did not and the result was disaster.

More pleasant examples are the English Civil War and the French Revolution. The former is a good example of an intransigent ruler, unwilling to adjust and accommodate to the social changes buffeting his rule. Charles had plenty of chances to strike a deal with Parliament and the growing merchant class that Parliament represented, but he chose confrontation instead. His response to crises was to crackdown, as much as possible, on any resistance to his authority. Charles made his enemies.

In contrast, the example of Louis XVI is a textbook case of how a weak leader can be swallowed up by crisis. The financial crisis that consumed the crown was avoidable, but Louis was unwilling to exercise his authority over the aristocracy in order to resolve it. At the same time, when he had chances to squash the revolution, he hesitated, allowing his authority to be challenged without response. Just as Charles should have been more flexible. Louis should have been less flexible. Like Charles, he lost his head as a result.

Modern people in Western countries don’t think much about how their rulers will respond to crisis. It is assumed that that the people in charge will examined the data, consult with experts, hold an open debate in the media and then settle upon a course of action to address the crisis.That’s because for as long as anyone can remember, there has been no crisis, at least not one that threatens the existing order. The only thing to come close to a threat to our rulers was the communist menace in the 40’s and 50’s.

That’s instructive because the response from the ruling class was the classic iron fist in the velvet glove. The government relentlessly hunted down communists, while the popular press relentlessly defended those “wrongfully” accused of being communists. The Venona Project allowed the government to root out subversives, with a fair degree of precision, at least the ones that posed a real threat. It was not until the 90’s that the public was made aware of the extensive domestic espionage operation.

The lesson of the Venona Project is that when the people in charge feel threatened, they will do whatever it takes to dispose of the threat. We’re seeing that today with the coordinated attacks on the trouble makers by the media companies. Twitter and Facebook are banning anyone that they think is in in the resistance. Even comedy posts can be deemed blasphemous. Yesterday some guy named PewDiePie was erased from the media for impure thoughts. Here’s the google search: 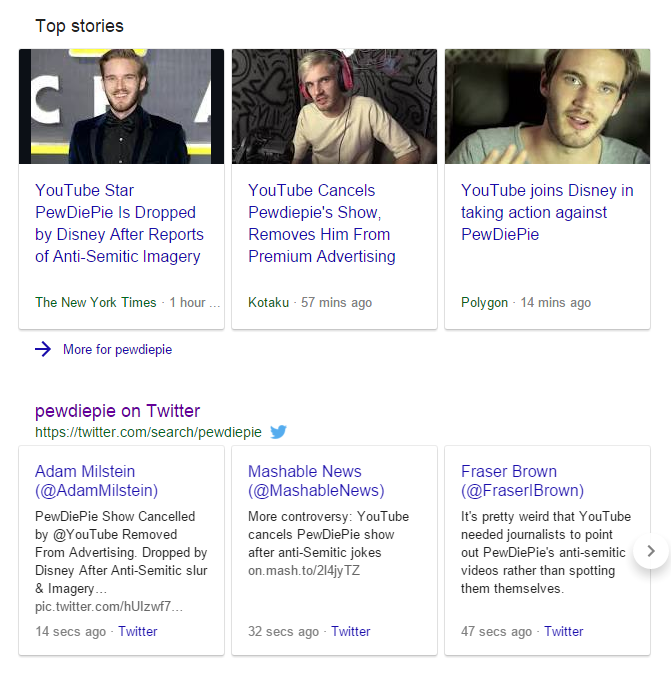 The level of coordination is astonishing. Google and Disney team up to erase the guy and then the mainstream press is out reporting within minutes that he was eliminated due to heresy. It could be a coincidence that all of the big media players were on this at the same time, but it could also suggest a high degree of cooperation. The people in charge are pulling out all the stops to crack down on dissidents. They consider the threat posed by errant comedians on YouTube so serious, any means necessary will be used to end it.

What’s important here is not that some comedian lost his livelihood. That’s part of the message being sent. The more important part is the coordination. The tech giants made it clear in the election that they were working together to defeat Trump. These are people who colluded to suppress wages and violate the nation’d labor laws so they have a history of this. Now we are seeing social media coordinating with the legacy media to send a clear signal that they are cracking down on dissidents.

Crackdowns on dissent are always in response to crisis. Whether it is perceived or real is the big question. A heavy handed response can turn a manageable situation into a full blown crisis. On the other hand, passive responses to challenges can lead to rebellion. The people in charge believe the lesson of the last election is to crack down hard, using every means necessary, to quell any challenge to their authority. That is the reason the intelligence agencies are now working with the media to undermine the President.

How this will play out is unknown. Charles I and Parliament were willing to fight a war over their disputes. The revolutionaries in France were willing to commit regicide to impose their vision on society. People today are not the fighting sort. The rulers struggle to imprison criminals and the people passively acquiesce to encroachments on their liberty. In other words, despite the big talk, there’s not a lot of fight in the people or their rulers. For now, it is cat ladies from HR harassing normies over their use of twitter, but that could change.

109 thoughts on “Crisis and Crackdown”