The readers who still cling to libertarianism have given me hell over my screed against their faith. I’m not without some sympathy for them. The core libertarian impulse to leave people alone in order to be left alone is admirable. If you are a libertarian, trying hard to live the non-aggression principle, it probably seems unfair that a hate thinker from the extreme Right is mocking your thing. I get that and I respect it to a point. That point is when I see something like this from the Pope of Modern Libertarianism. 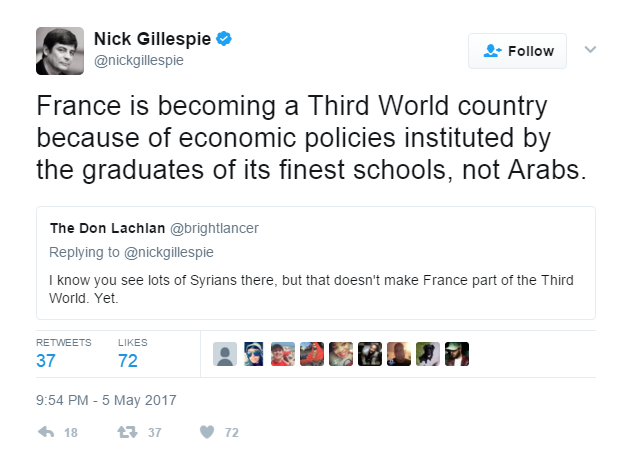 It should be impossible to be this stupid. I suspect for most of human existence, idiots who said moronic things like this tried to hand feed bears or cuddle with large reptiles, thus eliminating themselves from the the system. There’s no other way to read this than Nick Gillespie believes some minor alterations to the French tax code will ameliorate this. 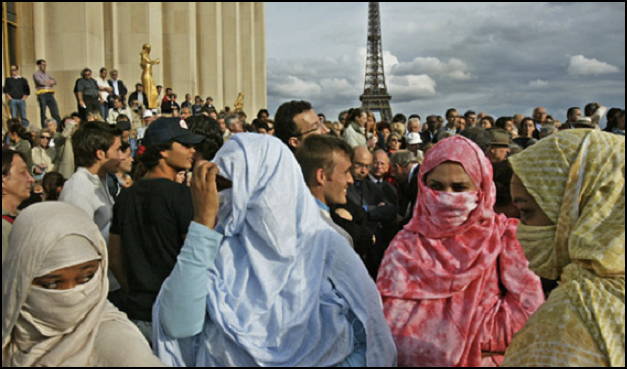 Now, does Nick Gillespie really think altering tax policy will magically transform low-IQ, inbred Muslims from the Maghreb into patriotic French republicans who work at Parisian software shops? It’s tempting to say it is just another pose, but the evidence is piling up in favor of the argument that Nick Gillespie is a stupid person. Anyone who truly believes altering tax policy will reverse a thousand generations of evolution is an idiot.

That’s the fundamental problem with modern libertarians. They believe this or they simply are incapable of mastering ground floor level biology. The reason the country of Niger is a basket case is that’s the way the people of Niger want it. It is full of Hausa. The reason Paris was Paris was that, up until recently, it was full of Parisians! Now that Paris is filling up with North Africans and Arabs, it is looking like Algeria with better plumbing.

What’s happened to libertarians is a form of what someone calls convergence. It used to be that libertarians accepted the chain of causality. They worked backward in order to arrive, obliquely, at the first cause. If you wanted to have a nation of maximum freedom, you had to have a nation with rational laws and that meant a rational, Anglo-Saxon culture. The result was a libertarianism in one country model.

Then a new breed of libertarian showed up mouthing all the economic arguments of libertarians, often with the zeal of a fanatic, but embracing liberal cultural arguments, re-framing them in terms of personal liberty. The result is libertarians have almost fully converged now with the liberals. They have been assimilated into the Borg. Libertarianism, like most libertarians, is all about someone else paying for their ethic dining habits.

It’s why they are no longer of any use to the Right.