In a few years, the majority of children in the United States will be non-white. That means in a generation, the majority of adults will be non-white. Most white Americans don’t understand this, but slowly they are starting to wake up to this reality. Whether or not our rulers fully grasp this or the implication of it is a mystery. It is entirely possible that their hatred for bad whites is so all-consuming that they have not thought it through. Or perhaps, as some people argue, the great replacement is the point of the project.

Regardless, the darkening of America will have consequences. This story on the 2017 NAEP test scores is a good example. The results, unsurprisingly, are not positive, but they are predictable. The race gap that has allegedly haunted the ruling class for generations has not changed a bit. Of course, that’s not in the press coverage, but you can easily find it by going to the source. The only change in the race gap happened when they added a category for mixed race, thus moving some blacks out of that group. 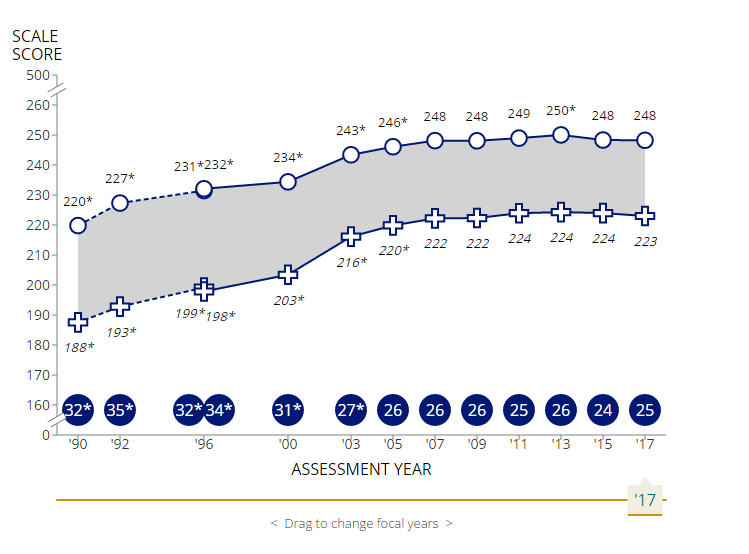 The comparison between whites and mixed race students is interesting. 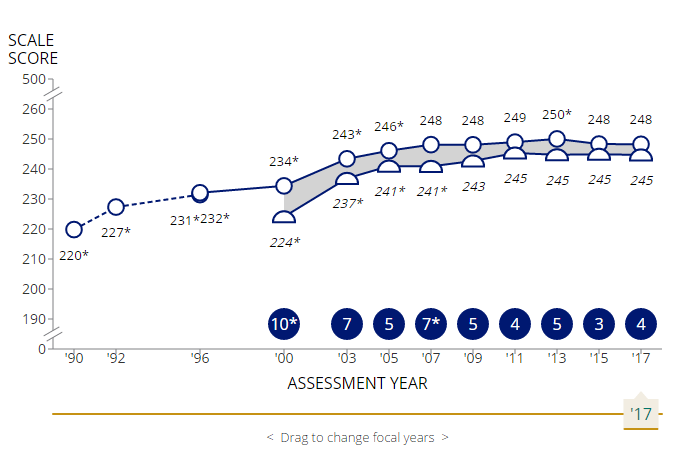 whenever these sorts of results are published, we get two predictable reactions. One is the Progressive lament about the schools. Left-wing Progressives will demand more money for the schools in order to fix all these terrible gaps. Right-wing Progressives will claim it is the fault of public schools and maybe unions. You can see some of that in the comments to the news story. The other response will be from the remaining stalwarts on our side of the divide, pointing out that biology refuses to yield to wishful thinking.

The thing is though, no one thinks much about what is going to happen as the the mix of students gets more swarthy. We are probably seeing that in these numbers. The gaps did not change, but the mix of students is changing. That means the results will continue to decline going forward. Maybe our rulers will keep yelping about the schools, but at some point, they will probably change the standards or start faking the data so the obvious is less obvious. That’s the thing about diversity. It can only work in a no-trust society.

Of course, it’s going to mean schools start competing with one another for white and Asian students. Since the foolish decision to desegregate schools, it has been a game of Old Maid, as school districts and municipalities employ clever ways to dump their unwanted blacks onto some other sucker. The future will have that plus rules to keep the children of ice people trapped in their schools. In time, a Democrat administration will create rules that prevent whites from moving away from blacks in order to “balance the schools.”

The state and city break down tells a familiar story. The test results track closely with demographics. A city like Detroit finishes at the bottom, because it is a black city, while Austin finishes at the top, because the black population is eight percent. The state breakdown is also familiar. It reveals that not all whites are the same, but the non-white population is very consistent. I took a look at the top-10 and bottom-10, along with the white population for each state. West Virginia is letting white people down.

The two outliers in the top-10 are states with high numbers of South Asians, as well as more blacks from the talented ten percent. The financial capital and the political capital of the world warp everything around them. Even Maryland feels some of it. Otherwise, the results track closely with the white population. That means if you want your state’s test score to improve, you need to attract Asian migrants and figure out how to encourage blacks to move to another state. You may want to pass on Hispanics too.

This is just one example of what happens when you get more diversity, but it is a good one. High quality public schools are largely an Anglo thing. It spread to the Continent, along with other liberal ideas, but is not a big deal in the rest of the world. East Asian societies are an exception. As America moves to majority-minority status and becomes a low-trust society, the very idea of public schools will probably disappear. How long before the people in charge figure out that testing is largely pointless and put an end to it?

Look around South America, that’s a pattern you see. The white population simply does not care all that much about the non-white population, beyond making sure they are not around them. A very similar pattern has existed in the Levant for centuries. Every hill and village is its own country. That’s the other thing about diversity. It breeds a callousness between different tribes of citizens. In one of life’s ironies, one of the first things that will die in the diversity paradise is civic nationalism. Ben Shapiro should plan accordingly.