A suddenly popular hobby for the statistically minded is the modeling of the coronavirus pandemic that threatens to sweep the West. The statistician to the stars, William M. Briggs, has been modeling things like the utility of testing. Steve Sailer has been promoting a person blogging under the name “Arguably Wrong”, who has been modeling the cost of different containment strategies. Of course, the CDC is taking this opportunity to whip up a panic with their models.

The right word is panic, as we have hoarding of useless supplies like toilet tissue and bottled water. Starting this weekend, tens of millions of America will be sheltering in place and self-isolating over fears of the plague. Schools are closing and will remain closed for six weeks. Entertainment like sporting events and public gatherings has been canceled indefinitely. America is about to go into an unprecedented shut down of the economy and civic life based on what could happen.

That is a very important variable. The numbers thus far are trivial, in terms of infections and deaths from this virus. Italy has the highest per capita infection rate. That infection rate for Italy in the chart below means there are currently twice as many dwarfs in Italy as there are virus victims. In the United States, almost as many people have been struck by lightning this year as have contracted the virus. More people have committed suicide this year in China than have died from this virus. 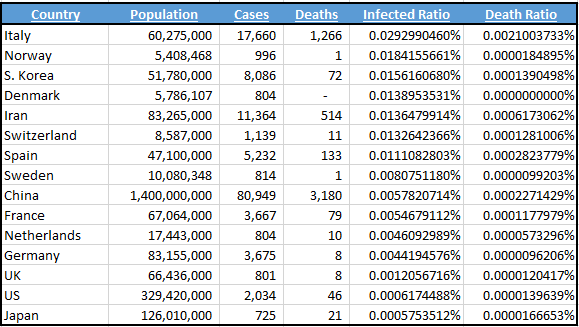 Now, the experts all say these numbers will explode in the near term. Just as the flu or the common cold starts small, person to person contact causes the infected population to grow quickly. Currently, the claim is the infected population will double every five days, with no end in sight. Italy, for example, could have 200,000 cases by the end of the month, if that prediction is correct. By May a little under one third of the population would have the virus and by June everyone is infected.

This is, of course, exactly what did not happen in China. In fact, we have no reason to think this will happen at all. We have examples of prior infections, some very serious like the Spanish Flu. We even have a good sense of the infection rate from the Black Death in the middle ages. As far as we know, there has never been a virus with an infection rate like what is being predicted. Maybe this is different. Maybe modern urban life makes us unusually susceptible to a pandemic. Maybe.

Further, we don’t know as much about pandemics as the army of experts in the media would have us believe. Most of the model makers are assuming the experts on this stuff have their facts right, but there is no evidence to support that claim. For example, the Spanish Flu remains a mystery. We know the strain of H1N1 and we have some sense of where it started, but we have no idea why it ended. We know it ended long before it reached the infection rates predicted for this virus.

In the fall of 1918, 4,597 people died in Philadelphia in the week ending October 16th from the Spanish Flu. By November, deaths dropped to zero and by mid-month the flu had disappeared from the city. No one knows why. Maybe it mutated into something very mild. Maybe it simply ran out of victims. Maybe limiting social contact finally stopped the spread. No one knows. That’s an important thing to keep in mind about these predictive models. They as yet cannot predict the past.

This is something that must be plugged into any model for this virus and models for predicting potential outcomes. The models being used will all be wrong and wrong in ways no one can predict. For example, what if there really is an ethnic component to these infection rates. The part of Italy being hit with the virus has a lot of Han Chinese for all the reasons we have non-Europeans in the West. The city of Prato Italy, population 200,000, has been overrun by Han Chinese.

Could there be an ethnic element here that would explain the numbers in China, Italy, Iran and the reaction by Israel? The Chinese seem to think they are particularly vulnerable to this virus. They have been studying coronavirus for some time, because they have suffered more than any country from it. Lance Welton at VDare has been cataloging the studies on this topic. The media experts dismiss this stuff, but that’s mostly because of the fear of being called racist, which is worse than death.

The point is the models that are driving the great shutdown of the West are based on assumptions that are most likely wrong. That means the models themselves will turn out to be wrong. Modeling the wrongness may turn out to be the most important project over the next several months. Right now, the public is grudgingly giving public officials the benefit of the doubt. The people have little trust in them, so when things are not as predicted, those public officials better have answers ready.

For example, what happens if we learn that the outbreak in Italy is centered in their large Chinese community? That’s going to have an effect on public policy, because it will have an effect on public attitudes. Even if lots of actual Italians gets sick, people are going to wonder why this fact was not made clear straight away. They may also wonder why there is a Chinese community in Italy. A whole range of prior assumptions are going to come under new scrutiny with new information.

How about something simple like the great spread of the virus does not materialize over the next few weeks? Public officials will no doubt claim that the lock down was a success, but that’s like claiming the reason there are no giraffes in your garden is due to installing a garden gnome. Very few people are going to buy it and the more so-called experts push it, the more the people will reject it. The already low faith in public officials will fall even further. There will need a better answer.

It may not even take a few weeks for the public to grow both weary and skeptical of the state of emergency. A very large chunk of society thinks this is a hoax. Young people are calling it the “Boomer Remover” while taking advantage of cheap airfares. Short of more data to fuel the panic, the public could get tired of this by next week. This approach to the virus can only work with public cooperation, so public officials should assume great public resistance within the next week.

There’s also the idiot factor. The fact is, America has rounded up most of its imbeciles and put them on government payrolls. Under normal conditions, they do a limited about of harm this way. Under these conditions, they can do a lot of damage. Red Flag laws have already embolden imbeciles on the local police forces to randomly open fire on people in their homes. The staggering incompetence of public safety units must be part of any model predicting what comes next with the lock down.

That’s the thing about a public emergency. Societies are systems with lots of hard to define inputs and sub-processes. The outbreak is one input that has set off a range of other inputs, which in turn has altered the behavior of many sub-systems. These sub-systems interact with one another, so the system we see, what we call daily life, is changing in unpredictable ways. All of these linear models violate the basic rule of models in that they assume things about the world that are false.

Life in human societies does not happen sequentially. Instead it is millions of lives operating in both parallel and in series. It’s very complicated. We see that with how public officials in America have reacted to the virus. When it was a Chinese problem, public official ignored it. When it became an Italian problem, suddenly it resonated with Americans, because we are familiar with Italians. It turns out that the input value of one dead Italian is exponentially more important than one Asian.

Over the next few weeks, public officials better be ready for being wrong about all the things they have been saying. Trump’s first instinct, like most Americans, was to dismiss the alarmists. The reason is they have cried wolf so often, only a fool would believe the alarmists at this point. If this turns out to be a big to-do about nothing, we suddenly live in a world where 300 million people feel like they were taken for a ride. There will be a price to be paid for being that wrong about something this big.

For sites like this to exist, it requires people like you chipping in a few bucks a month to keep the lights on and the people fed. It turns out that you can’t live on clicks and compliments. Five bucks a month is not a lot to ask. If you don’t want to commit to a subscription, make a one time donation. Or, you can send money to: Z Media LLC P.O. Box 432 Cockeysville, MD 21030-0432. You can also use PayPal to send a few bucks, rather than have that latte at Starbucks. Thank you for your support!