I got an chain e-mail today that read as follows:

Well, he is a former Democrat congressman who represented Iowa’s 1st congressional district in the United States House of Representatives for two terms, from 1973 to 1977.

He sat on the House Judiciary Committee that decided the fate of Richard Nixon. He was outspoken saying that Nixon was a crook and a disgrace to politics and the nation and should be impeached.

He and the Clintons were friends and very politically intertwined for many years.

Ed Mezvinsky had an affair with NBC News reporter Marjorie Sue Margolies and later married her after his wife divorced him.

In 1993, Marjorie Margolies-Mezvinsky, then a freshman Democrat in Congress, cast the deciding vote that got President Bill Clinton’s controversial tax package through the House of Representatives.

In March 2001, Mezvinsky was indicted and later pleaded guilty to 31 of 69 counts of bank fraud, mail fraud, and wire fraud. Ed Mezvinsky embezzled more than $10 million dollars from people via both a Ponzi scheme and the notorious Nigerian e-mail scams. He was found guilty and sentenced to 80 months in federal prison. After serving less than five years in federal prison, he was released in April 2008 and remains on federal probation. To this day, he still owes $9.4 million in restitution to his victims.

About now you are saying, “So what!”

Well, this is Marc and Chelsea Mezvinsky. 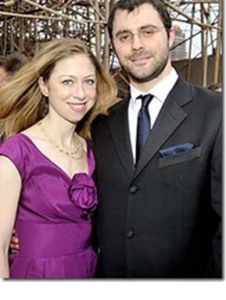 Now Marc and Chelsea are in their early thirties and purchased a 10.5 million dollar NYC apartment (after being married in George Soros’ mansion). Has anyone heard mention of any of this in any of the media? If this guy was Jenna or Barbara Bush’s, or better yet, Sarah Palin’s daughter’s father-in- law, the news would be an everyday headline and every detail would be reported over and over.

And yet liberals say there are no double standards in political reporting. And people are already talking about Hillary as our next President! And then there is possibly Chelsea for president in our future!

My first thought was it was one of those made up conspiracy theory things that gets recycled every administration. But, I remembered Mezvinsky from the Nixon days so I looked it up anyway. Here’s what Snopes has on it. Turns out it is true.

Steve Sailer likes to write about the deep state and I must admit I find it enjoyable. I’m skeptical about conspiracy theories, but that does not mean there are no conspiracies. What’s more common is the near incestuous dealings in the political class. If you get elected to Congress, the door is open for you and your tribe to join the ruling class and stay there regardless of your actions. You need to win re-election and prove you will not make any trouble for the people in charge. Once you do that, you are granted tenure and even a lengthy trip to the Federal can does not get you thrown out of the club.

That means your relatives can gain insider access to business deals unavailable to the hoi polloi. Your kids go to tony private schools and marry the kids of others in the political class. It’s a milder form of the big man politics so popular in sub-Saharan Africa. In South America it results in a system where the ruling elite will do anything to keep the peasants down in the valley. In Africa and the Middle East it means the dominant tribe murders any tribe that seems threatening, while the big man enjoys the benefits of being the big man. In the Occident, its more subtle and more diffused, because the smart fraction is much larger. Still, it is not hard to see how it can ossify into something more insidious than just grubby theft and graft.