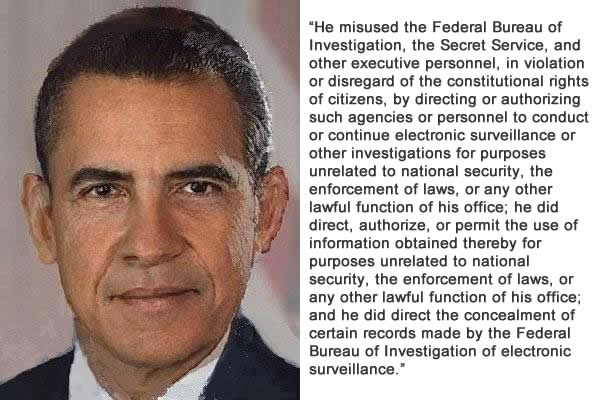 If you read the Articles of Impeachment against Richard Nixon, what jumps out to a modern reader is just how weak the case was against the President. Impeachment is a political action, so the rules of evidence we see in a courtroom don’t apply, but even so, the allegations seem weak in comparison to those against Bill Clinton. The case against Nixon was what we would now call a corrupt enterprise, like a mobster. Bill Clinton, in contrast, was accused of specific crimes that he committed while in office.

In fact, it was the political nature of both cases that led to very different results. In the case of Nixon, the move to impeach him was the denouement to a long war between Nixon and the Washington establishment. They wanted him impeached because they hated him. On the other hand, the impeachment of Clinton was unsuccessful because the ruling elite decided to defend him. There was no doubt that he was guilty of perjury and he brought dishonor to the office, but Washington insiders were willing to give him a pass.

These two events are relevant to our age, especially the case of Nixon, as evidence emerges of serious corruption at the end of the Obama years. It’s been clear for a while that the ridiculous Russian hacking stuff and the the special prosecutor were a smokescreen to conceal something else. Months ago, I made the point that the most likely thing being concealed was corruption within the the FBI. It was the most obvious answer, as Mueller, Rosenstein and Comey were the guys leading the charge on it.

What we’re learning now is the Department of Justice was most likely compromised by the same people corrupting the FBI. This story from The Hill reveals that former Attorney General Loretta Lynch was coordinating with FBI Director Comey on the Clinton e-mail scandal. Given the relationship between Lynch and the Clintons, it is safe to assume she was keeping them up to speed on the process. It’s also possible that Lynch never stopped working for the Clintons and was steering the investigation.

The link between Peter Strzok, the Chief of the FBI’s Counterespionage Section, and the Clinton operation is important, because of what is being learned about what the FBI was doing during the election. This very detailed write up from Conservative Treehouse is impressive, but quite long. It pulls together all of the public information related to the top-secret memo floating around Washington. Very serious people are talking about what is in that memo, characterizing it as the worst scandal in American history. That’s not nothin’.

The narrative that explains all of this is that high ranking people in the FBI, maybe even Director Comey, were working with the Justice Department to help Hillary Clinton in the election. That has seemed clear for a while now. What’s becoming clear now is Fusion GPS, the political dirty tricks operation, functioned as a cutout for the FBI and the Clinton campaign. The FBI shared secret intel with Fusion, who then sold it to the Clinton campaign or distributed to the media at the direction of the campaign.

There’s a word for all of this and it is called treason. It’s one thing for a career intelligence officer to go bad and start selling intelligence to a foreign government. That just a part of the life of a nation state. It is an entirely different thing when senior members of the political class are working to undermine the fundamentals of the political system. It is the sort of thing that results in hangings or civil wars. It’s why the infamous memo has not been released, despite the fact it could be leaked or declassified by the White House.

That’s what brings us back to Dick Nixon. The mere hint of abuse of the FBI and CIA by the political side of the White House was considered enough of a threat to warrant impeachment. What we have here is worse than anything Nixon was accused of doing, even by his fiercest critics. Stuff that is orders of magnitude worse went on in the Obama White House. Imagine senior FBI men, faced with federal prison, agreeing to rat out major political actors. Imagine them pointing the finger at Obama or his top aides.

Again, this is fundamentally a political problem, but it cannot be ignored. That’s probably why no one is in a hurry to release that memo. It’s not just about partisan politics. Imagine how blacks would react if we have a full blown political crisis that paints Obama as worse than Nixon. That is looking increasingly possible. People have forgotten about the systematic abuse of the IRS, using it against conservative activists in the run-up to the 2012 election. There’s only so much that can be swept under the rug to protect Obama.

This will not end well.