There are a lot of ways to describe the new political divide that has emerged over the last decade. We have nationalists versus internationalists, globalists versus populists and identitarians versus the multiculturalists. All of those are true, but another way of thinking about it is that the debate is now moving upstream. For a long time, public debate was focused on economics or maybe politics. Those are downstream from institutions, culture and biology. Now, the debate has moved upstream, to the the stuff that really matters.

Not everyone has figured out that the debate has changed. The Bernie Bros, for example, are like the Japanese soldiers, who were cut off in the war and lived in the jungle for years, still fighting the war. The Bernie Bros still think the Democrats are the party of the working man, as if anyone in Washington cares about the working man. The legacy conservatives are similarly trapped in a bygone era. You see that in this post, by our old friend Sloppy Williamson, on the ravages of socialism on Venezuela.

he United States has resigned in protest from the UN Human Rights Council, which has a long and ignominious record of protecting the world’s worst abusers of human rights. The proximate cause of the U.S. resignation was the council’s unwillingness to act on the matter of Venezuela, where the socialist government of Nicolas Maduro is engaged in political massacres and the use of Soviet-style hunger-terror against its political enemies. Venezuela remains, incredibly enough, not only protected by the Human Rights Council but an active member of it, an honor shared Vladimir Putin’s Russia and its political assassins, the People’s Republic of China and its organ harvesters, and the Castro dictatorship in Cuba with its torturers and al paredón justice.

Venezuela and North Korea could not be more dissimilar in terms of their respective cultures, peoples, and histories. And yet they have arrived in approximately the same place: at the terminus of F. A. Hayek’s “Road to Serfdom.”

For generations, it has been an article of faith, among conservatives, that everything depends upon economics. It’s not just that if you get the economics right, then the miracle of the marketplace will usher in the the age of bliss. It’s that their preferred economic models are intrinsically moral. That means the wrong economics must always result in terrible outcomes. Bad tax policy not only makes people poor, it makes them corrupt, violent and cheat on their wives. Like Marxists, they think the system makes the man.

Well, what about Venezuela? What’s really going on? Here’s the per capita GDP. 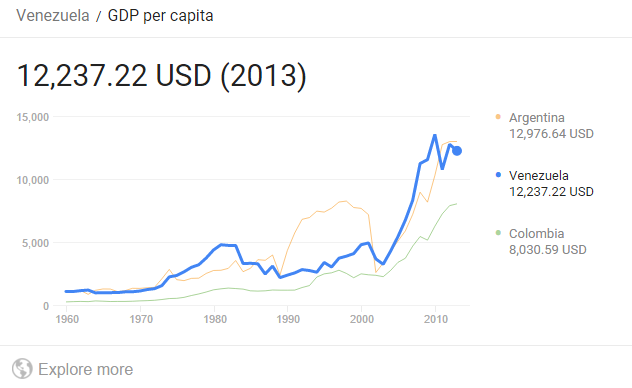 That’s in constant dollars and it shows a remarkable thing. After the turmoil that brought Hugo Chavez to power, the Venezuelan economy started a nice run. Per capita GDP is a benchmark number that economists love to use to measure the health of a country. Here’s what wages look like in the country:

Now, wages and economic growth don’t tell the whole story. Venezuela suffers from the curse of natural resources, which in her case is oil. What dumb people call socialism is really just the way things have always operated in countries with low levels of human capital. The elites monopolize the natural resources and the profits that come from selling them on the international market. They spread enough money around to prevent a revolt, but otherwise it a system not all that different from what existed in colonial times.

In other words, what ails Venezuela is not ideology. It is biology. It is the way it is because of its people. What determines the nature and character of a country is not the tax code or the regulatory regime. The nature of a country comes from the people. Venezuela lacks the human capital to operate a modern economy. It has and always will suffer from the smart fraction problem. That is, it lacks a large enough smart population to carry the rest of the population into a modern economy. It remains stuck in a model suited for its people.

Put another way, it is people, not pots. Replace the Venezuelan population with Finns and they will figure out how to make a mild form of Nordic socialism work just fine. Fill the place up with Japaneses and the country will look like an Asian tiger. At the same time, begin to fill up the United States with Latin Americans and it is going to start to look like Latin America. That’s why your newly imported replacements are running on platforms familiar to anyone getting ready to vote in the upcoming Mexican elections.

Of course, the reason that raging cucks like Sloppy Williamson avoid the obvious is that it is much safer to focus on trivialities. Lefty mobs are not going to swarm his Rascal scooter if he avoids taboo subjects. That and these guys have been playing the role of useful idiot for so long, they are unable to notice that the world has changed. They operate like a cargo cult, convinced they can pretend it remains the 1980’s and it will magically be so. National Review is like a weird living museum to the Reagan era.

The world has changed, though, and the debate has shifted upstream. People are noticing that when you elect a new people, you don’t actually end up with a new people. You end up with a culture that reflects the biology of the people you imported. Whites in America are now coming to terms with the choices in front of them. Keep their head down and play make believe while they are replaced, or risk moral condemnation for defending their heritage and their culture. It’s a future with you or without you. That’s the debate.

147 thoughts on “Venezuela’s Future — and Ours”