In a series of tweets yesterday, someone calling herself Emerald Robinson announced she had evidence that at least one “conservative” magazine was taking payola from a tech giant. The implication was that the magazine was taking money in exchange for countering the stories about the tech oligarchs censoring dissidents.The woman works for an outfit called One America News, which is a small operation that has made a name for itself during the Trump phenomenon. Here are the tweets in case they vanish. 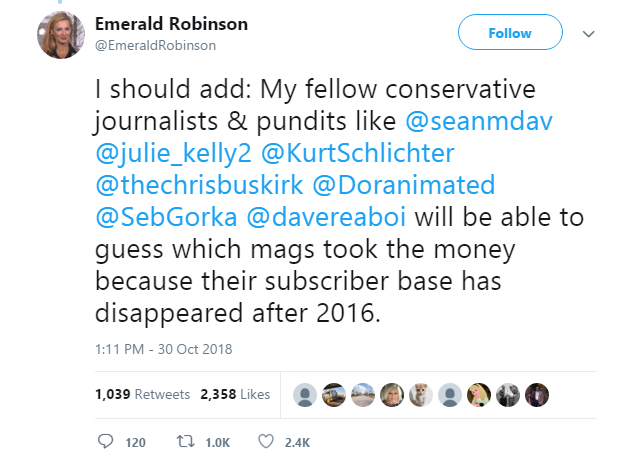 The most likely candidate, before examining the hints in the tweet, is National Review, which lost its moral compass when Rich Lowry took over the operation. It’s also the one conservative publication with any influence, at least before it hurled itself onto the NeverTrump bonfire three years ago. If you are going to bribe a conservative publication, you may as well bribe the biggest one. It’s not like any of these operations are making so much money that they would say not to a bribe. It’s their reason to exist.

Of course, the clue about the subscriber base evaporating adds to the speculation that the culprit is National Review. When you look at the tax filings for the 501(c)(3) they use to launder contributions, it appears their donations shriveled up during the campaign. Their ugly smear campaign against Trump and his voters turns out to have been a costly blunder. That is if the tax filings tell the whole story. It is possible that the tech giant or some other wealthy patron is paying writers directly or using another vehicle.

I speculated during the campaign that Dan and Farris Wilks were buying support for Ted Cruz and funding the NeverTrump lunacy among so-called conservatives. The two are members in good standing of the donor class and the guys bankrolling people like Ben Shapiro, Dennis Prager and Glenn Beck. My suspicion was they were spreading cash around on the side to the various pens for hire at operations like National Review and the Federalist. It would explain some rather obvious patterns we saw in the campaign.

Now, in fairness to National Review, we don’t know if the person tweeting this stuff is legitimate or correct. Her name suggests she should be swinging from a pole, rather than covering the White House, but these days, the differences between the two professions are microscopic. In fact, it would be a relief to learn that the mass media is simply singing for their supper, delivering what a handful of billionaires demand. Otherwise, it suggests a systemic failure that can only be addressed by madame guillotine.

Still, even if the rumor is just that, it raises an important point. The media in America has never been objective or bound by a code of conduct. Into the twentieth century, everyone understood that the newspapers were owned by rich guys with an agenda. There were newspapers for the parties and for the factions within each party. What happened in the Cold War is the bias was concealed in an effort to fool the public into supporting the struggle against the Soviets. Suddenly, reporters became journalists and priests.

When you dig through the tax forms of the various not-for profit operations used by Conservative Inc., you find that their stars are living lifestyles that would make the people who read them faint. Jonah Goldberg is a great example. He’s gets 200 large from the National Review Institute. He gets a similar figure from American Enterprise. Then he has a cable deal from Fox. He writes books that no one reads, but the not-for-profit system buys these books in bulk. Add it all up and he lives like royalty for doing very little.

Of course, this explains why the so-called conservative opposition is unwilling to oppose or conserve anything. They are afraid to bite the hand that feeds them. To wander off the reservation and possibly anger their pay masters, means leaving a life of extreme luxury for, at best, a middle-class life. It’s not as if a Jonah Goldberg could replicate his earnings in the dreaded private sector. The life of a kept man is one of trepidation. They live in fear that the fads will change, they will be deemed heretical and ejected from the hive.

At the human level it is somewhat understandable, but when you look at the whole, it means the whole system is a massive scam design to fool the public. Just as campaign finance laws are designed to obscure who is bribing your politicians, the labyrinth of 501(3)(c) operations that finance the commentariat are designed to conceal who is controlling public opinion. Even if we never get the full story about which publication was taking the bribes, the truth of it is slowly bleeding into public consciousness.

In the meantime, the kept men glance furtively at social media, wondering if it will be their publication that gets outed or if maybe their name will turn up in the story. Maybe some are reaching out to their friends at other media operations, just in case they need to find a new landing spot. It’s the whore’s life they chose, so no one should feel pity for them. In fact, these people deserve nothing but scorn. They choose to play an active role in the decay of our society, by undermining social trust. They deserve what’s coming to them.